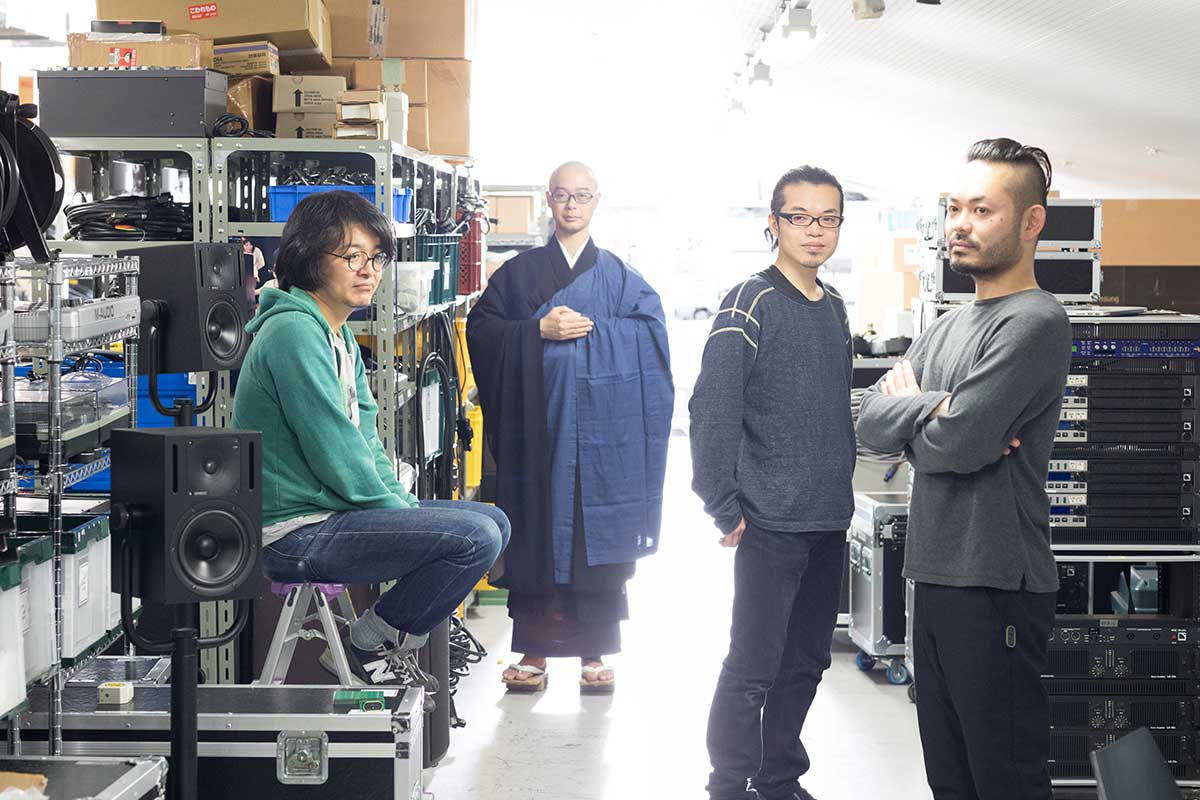 The SINE WAVE ORCHESTRA (SWO) is a project that works exclusively with sine waves that was launched in 2002 by Ken Furudate, Kazuhiro Jo, Daisuke Ishida and Mizuki Noguchi. ”The single sine waves, which the participants each play freely without a score or conductor, rise and intricately interfere with each other like thin strings, and ultimately create an ocean of sine waves.” Based on this image, the SWO presents works between and within performances, installations and workshops and invites the public to create a collective sound representation.

Referred to as “music being produced outside of traditional music boundaries, a collective deconstruction of the ‘ego of self-expression’ that is prevalent in most musical styles”[1], and “‘sonic / musical events’, where people get together to share a certain time and place, even though there aren’t actually performers intending to play sounds to an audience”[2], the SWO provides and maintains a framework that offers visitors participation in the creation of the work itself. The work is defined by the interplay of the spectators and the sine waves they play.

A sine wave is said to be the most basic sound, therefore called pure tone which contains neither overtone nor noise but a single frequency. In the early 19th century, French mathematician Joseph Fourier discovered a certain formula for representing any kind of sound through combinations of multiple sine waves (known as “Fourier transform”). For example, when playing the same note on a piano and on a violin, we can distinguish the instruments’ sounds because of their respective overtone composition, which is different in each case because of the different ratios of higher pitched sine waves added to the respective fundamental sine waves. Based on the same formula, it is possible to make not only music but all kinds of noises, reproduce the sound of the human voice, or any other sound through different combinations of sine waves.

Because of its fundamental importance, a purpose not restricted to sound and the sheer infinite number of possibilities of application, the SWO originally choose to dedicate their work to the sine wave.
The SWO has presented artistic activities in museums, festivals and galleries internationally such as Ars Electronica(AT), Arsenals of the Latvian National Museum of Art(LT), Dutch Electronic Art Festival[DEAF](NL), Edith-Russ-Haus für Medienkunst(DE), NTT InterCommunication Center[ICC](JP), International Triennale of Contemporary Art Yokohama(JP), Inter-Society for the Electronic Arts[ISEA](USA), Museum of Art, Rovereto and Trento[MART](IT), Museum of Contemporary Art Tokyo[MOT](JP), Transmediale(DE), Yamaguchi Center for Arts and Media[YCAM](JP) and The Yebisu International Festival for Art & Alternative Visions(JP).